“Sorry. But I won’t let your bullshit ruin my Zen.”

So, by now I’m sure that all of you out there have either seen or even unfortunately dealt with this issue that seems to be getting worse. Harassment, bullying & and an old word that has only found a new meaning recently in just a few short years

One of the continuing things which I seem to notice on Facebook, Twitter & now even on Instagram over the last few years is the amount of people from all walks of life etc who seem to have a lot of nasty little insecurities about themselves. And what I mean by that is they aren’t actually on these wonderful social media sites to share their lives, photos, a great moment, pictures of their cats, thoughts or even on some occasions their work, art or poems but have twisted it into their own “see me” popularity contest or who insult or try to degrade others in a desperate, pathetic attempt to draw attention only to themselves. I’m not talking about political views here, bots or even minor sarcasm but individuals who constantly seem to attack others in groups, public forums or otherwise because they have no real or other original form or means of communication. These are people, and in some cases not even real people with fake profiles who alot of the time try to hide or cloak themselves behind phrases like “Free Speech” or even claim to be advocates for that. But what that really amounts to is a lesser human and self-centered attention-seeking device known as ” Trolling”. aka Trolls. Perhaps you’ve seen some of them on Twitter, Medium or even on FB who have even prefected this as an art form and a means to an end. Why? Because otherwise, NOBODY would bother or even notice them or in some cases even notice their work if they didn’t act towards others in this disturbing, false & narsassitic manner.

“Hating out loud became “Vogue” in 2016. And has gotten worse the past few months. I really have scaled back my FB time because the bullying & trolling is totally out of control. ”

In this era it seems that we most definitely are far more experienced in spotting a fake, a scam or a truly bad con artist pushing his goods to an audience or have a sixth sense of spotting a troll when we see one. Because these days after four years of actually being led by a sadistic racist troll we are just a bit more wary of those who consistently have a history of making negative comments about everything. I would say they even make a career out of it. Personally? For Instance I’m just a little skeptical of writers or poets I’ve had experiences and dealings with over the years with who just seem to try way too hard to offend or shock people, who with their attacks particularly target others on their posts. Y’know the type I’m sure. The kind that only care about getting attention & publicity or who try to rain on someone else’s parade every chance they get. But this behavior pretty much demonstrates that they don’t have anything truly meaningful or real to say in the first place. But also? They are legion. A unseemly long list of frauds, fake critics and sadistic ass clowns who just enjoy trying to wound others but whose own egos can’t really take any punches back on the chin if you hit them back hard. Unfortunately in this day & age alot of them, these professional haters have collected and gained followers who enjoy sharing in their very selfish & unkind rhetoric that they get off on. (Much like the followers of Donald Trump) They attack mostly in cowardly groups and have no care or conscience about who they hurt or what they are destroying as long as it puts them in their own “twisted little limelight”. They don’t actually give two shits about the subject matter as long as it brings them some small form of joy/enjoyment hurting others through cruel criticism, arguments or merely pure lies. Just recently, my friend Jay Dalaba ( Hex’ M Jai) and I had a conversation about this subject and even thought up a swell idea on how to mock and make fun of these trolls and started our own private Facebook group as an extension of our small independent publishing press DeadMansPressInk and called it POETS WHO HATE POETS ON FACEBOOK. The idea was/is to completely create a take on what we’ve seen happen on social media everyday and turn it into a reverse play on all these kinds of hate-mongers and to create a group which actually & truly SUPPORTS and PROMOTES POETS, writers, their work and most importantly HUMOR. The page was/is a great success and most of it’s humor derives from memes, gifs and members poems poking fun at & of all the trolls out there with their egotistical and false humanity issues. The members ( both male & female) love it because it’s an open forum where they can enjoy posting their work and have no fear of being bullied or attacked by anyone. Not to mention, we don’t allow that or any form of racism or bullying in our group at all. And never will.

But what happens when you create something magical or a unicorn that works?

IT ATTRACTS A REALLY RIDICULOUS TROLL.

Less than one day into our new & exciting venture a “poet” ( we’ll refer to him as M.S. for short) started in with the attacks. He had posted only two poems so far in the group that only got one like or so for each. And then? Suddenly he went all false victim, hissy and whiney and posted on the page something akin to that our group was only about quote ” Poet Friends Who Only Love Their Poet Friends” and accused all the members of favoritism and insulted them & labelled them all as untalented and quote ” Poor Poets” even though half the poets didn’t even know who the other poets are

M.S. the Troll read the rules and knew that the group wasn’t just about supporting his ego. It was a fair group about supporting all poets as well as treating others and playing nice. Needless to say after he made up and posted all sorts of ridiculous allegations & after reasoning became a total waste of time we threw this immature 60 year old something baby out of the group who we thought might unfortunately have mental issues. So we politely blocked him and advised him it was his own behavior and his slander that was his own undoing. But afterall that’s how all trolls should be dealt with because they are liars mostly to begin with. So after we blocked him I did some research which was quite eye-opening. M.S. had a very long history and record it seems of playing the victim and being tossed out of other groups like Rattle magazine online as well as several others. He was also in trouble as well for threatening journal and zine editors as well. This was his career, the only untalented way he gets personal attention for his minor league writing by creating arguments and then turning it back on them and posting it as his doctored, false experiences and lies in story form on Medium where a handful of his gullible followers read it as if he is the victim who is the one being bullied and treated badly.

And how sad is that?

And in the end and all over google he’s known as a mere downgraded bullshit artist. And that’s the only real truth that exists.

So unaffected by this our fun group goes on with more happy new members free to share their work without the fear of a true bully or slander and far better off without one unsavory troll.

Because overall? When we as friends or even strangers experience this or see this happening we come to the real conclusion of what these people, trolls simply shows us exactly what they are and what they will always be. Not a real or a true part of humanity but in all honesty far less than the potential of what they ever could be. And that kind of person isn’t really worth bothering with and will always be a useless waste of time and space. So do it. Never be afraid to block & delete them and don’t even bother to argue or reason with them because that’s not what they are looking for. 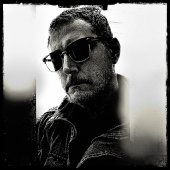 R.M. Engelhardt has published several books over the last two decades including The Last Cigarette: The Collected Poems of R.M. Engelhardt, VERSUS and others. A poet & writer, Engelhardt through his ideas and visions has helped to create a large amount of the Upstate, Albany, NY spoken word~poetry scene and is the former host of the long running “SCHOOL OF NIGHT” an Open Forum-Mic For All Poets. His work has also been published by many journals on the net & in print including Retort, Red Fez, Rusty Truck, Sure! The Charles Bukowski Newsletter, Thunder Sandwich, Fashion For Collapse, 2nd Avenue, The Angry Poet, Danse Macabre, Full of Crow, The Outlaw Poetry Network & many others.